Experience Bangkok: Memorable Destinations in the City of Smiles

Bangkok is the capital of Thailand; this bustling city is one of the most visited cities in the world, with more than 20 million visitors partaking of a vibrant food scene, a rich history and culture and nightlife that attracts partygoers from every corner of the globe. It has also been the filming location of several international blockbuster movies, the most notable of which is “The Hangover”.

If you are planning to include this city in your itinerary around Asia, here are the top places to visit in Bangkok.

Construction of the palace began in the early 1780s when the capital moved to Bangkok from Thonburi. The complex became the home of the country’s kings until King Ananda Mahidol died mysteriously in the mid-1940s. Fast forward to today: the palace grounds is one of the most famous landmarks and attractions in the city. The compound includes a royal temple and Wat Phra Kaew, where visitors will find the Emerald Buddha.

Backpackers have traditionally made Bangkok their first stop on their trips across Southeast Asia, and typically congregate near or on Khao San Road. This is where tourists hang out, get drinks, try local food and experience the chaos of the city. This place has several hotels for every budget, as well as shops that sell a variety of goods and trinkets.

Also known as the Temple of the Reclining Buddha, Wat Pho is a frequent can’t-miss destination for those visiting Bangkok. When you walk inside, you will see a gigantic statue of Buddha in a reclining position. The enormous golden statue will set the mood for visitors, and often puts them in a reposed, reflective mindset. The temple is approximately two centuries old and is one of the biggest in the city. You will also see many images of Buddha while exploring the complex. 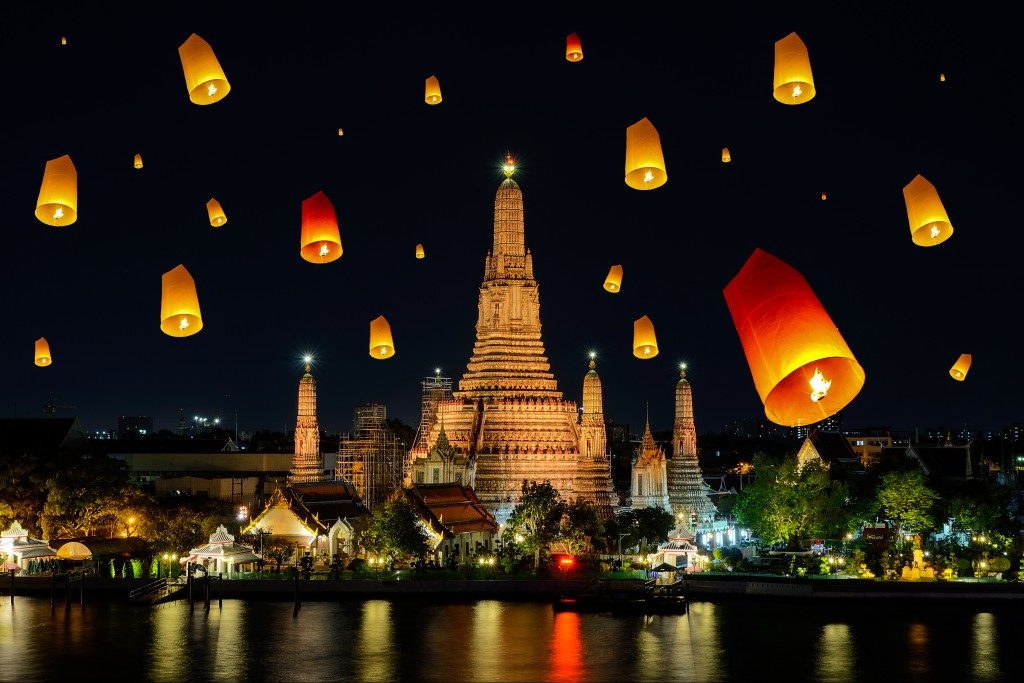 The Temple of Dawn or Wat Arun is an ancient landmark along the Chao Phraya River. It represents Mt. Mer, which is the universe’s centre in the cosmology of Buddhism. Explore the complex and soak in the history and culture of an ancient civilization, or see it lit up in the evening while enjoying a river cruise.

The Temple of the Emerald Buddha or Wat Phra Kaew is home to a jade statue of Buddha, an ancient relic dating back to the 15th century. It is housed in a luxurious building located within the compound, and the Thai king is the only one allowed to touch it.

This market has thousands of stalls that sell anything, from apparel to furniture, antiques and souvenirs. Many people, both local and foreign, visit to get bargains and shop till they drop. After shopping you can sample street food or eat at any of the nearby restaurants.

You cannot leave Thailand without watching a Muay Thai match. Get a ticket and join the frenzied spectators at Lumpinee Boxing Stadium. The fights are prestigious and gain acclaim for the victorious kickboxers.

These are some of the places to visit and things to do to get a sampling of Bangkok. The city has more to offer and travellers should seek their own secrets within this amazing city.